Antennagate reduXS? If so, what can Apple and iPhone users do about it?

About 10 days ago, shortly after the Apple announcement event, I published an article that analyzed iPhone XS and XS Max RF performance as revealed in lab test measurements in the devices' FCC OET authorization filings.  Some of the lab test data raised potential red flags regarding the new iPhones' RF reception and transmission abilities in low signal strength conditions.  My analysis in that article concluded with...


...iPhone EIRP in the lab has not always been so compromised as it appears to be this year.  Real world RF performance comparisons when some users switch from the iPhone X and 8 generation to the iPhone XS generation, no doubt, will be interesting.

Well, over the weekend, more and more early adopters started getting their hands on their brand new iPhones, posting their real world impressions online.  While opinions on RF performance have varied from high praise to utter disillusionment, some anecdotal user reports and empirical signal comparisons at MacRumors forums and in more than one Reddit thread have been notable because they appear to corroborate how the aforementioned lab test results submitted to the FCC might extrapolate to less than stellar real world performance.

In many ways, this harkens back to iPhone 4 antennagate in 2010.  Without rehashing all of the details, iPhone 4 users just by holding the handset could bridge together unintentionally two antennas on the edge of the phone, thereby accidentally detuning both antennas and significantly degrading RF performance.  In response to the issue, Steve Jobs famously was misquoted as saying to users about the phone, "You're holding it wrong," which since has become a blame redirection meme unto itself.  Apple's official response was to provide all iPhone 4 purchasers with a free case to insulate the antennas from users' casual embrace.

But returning to the present, if the disappointing RF performance that at least some appear to be experiencing eight years later with iPhone XS and XS Max does boil down to another antenna issue -- weak antenna gain this time -- holding the handset differently or adding a case/bumper is not going to solve the issue.

Some have proposed that, if necessary, an Apple firmware update or two will sort this out.  Yes, iOS revisions and/or carrier updates can tweak the way the baseband modem interacts with wireless networks at large.  And, from an end user perspective, this can improve (or degrade) perceived performance.  However, what software cannot do is update physical qualities locked in during design and manufacturing.

An analogy for this could be the LCD or OLED display screen on your handset.  New firmware might improve image quality by way of adjusting gamma curve, color calibration profile, scaling algorithm, etc.  But that software update cannot change the screen size or pixel resolution -- both are physical characteristics.

In that spirit, if Apple acknowledges an issue and a fix, what software or hardware remedies could it propose?

Apple could submit to the FCC OET a Class II permissive change filing, which is an amendment to an original equipment authorization filing with additional lab testing to reflect a material change in the device.

Let us take a look at two possible Class II changes that Apple could implement, though for reasons to be explained, Apple probably would not pursue either one.
Conducted power is the input to the antenna, while radiated power (EIRP) is the output from the antenna.  But with increased conducted power, increased EIRP also would result.  This could help RF performance in situations in which the uplink hits its power limits before downlink reception drops below usability.

Then, for visual reference, see a graph of iPhone XS Max conducted power.  Note that this graph is expressed in dBm instead of mW to reflect more directly the up to +2.5 dB boost Apple already has applied to conducted power above the standard 23 dBm and 26 dBm target levels, respectively. 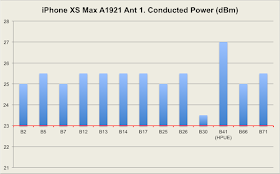 Without HPUE across all bands, Apple has little, if any additional wiggle room to increase conducted power.  And, remember, bumping up conducted power helps only with uplink transmission.  It does not improve downlink reception.
Increased antenna gain would cause increased EIRP -- with or without increased conducted power.  Additionally, as long as the same antenna arrays are used for both uplink transmission and downlink reception, improved antenna gain can assist in received signal strength, too.

This sounds like the ideal solution.  And, quite frankly, it is.  But for even more obvious reasons, Apple would be highly unlikely to go this modified hardware route.  This would be the nuclear option, so to speak, that would require some redesign and retooling of yet to be manufactured iPhone XS and XS Max units as well as possible replacement of extant phones for any dissatisfied users.  Instead, any antenna design changes probably will be saved for next year's iPhone generation.

So, what can iPhone XS and XS Max users do right now?

The new iPhones undoubtedly show some measured RF shortcomings compared to their predecessors and other comparable handsets.  However, the jury very much is still out on how much and how often this will affect typical use cases.

In the interest of investigation, many users already have jumped to comparing signal bars, though doing so is not very useful, since signal bars are just a coarse approximation of signal availability/quality and can be calibrated to almost any arbitrary standard.

Accessing Field Test to compare signal metrics (RSRP, RSRQ, CINR) across multiple devices actually is useful.  But this must be done with a watchful eye and solid understanding.  PCI, GCI, and EARFCN all must be the same in the same location to ensure that both devices are on the same PCC of the same site and sector.  Any difference among those matching signal characteristics eliminates a legitimate apples to apples comparison.  So far, Field Test reports are scant, though many more should be forthcoming as savvy users put their new phones through the paces.