Moto 5G MOD comes at a cost measured in mW

Late last week, Motorola's Mobile 5G MOD (model number MD1005G, FCC ID IHDT56XL1) made its requisite appearance in the FCC OET database.  Part of the Moto Z series of modular attachments, the 5G MOD -- yes, repeatedly presented in all CAPS in the FCC OET filing, though we shall see if that sticks in the commercial branding -- is intended specifically as a 5G NR and LTE attachment for the VZW variant Moto Z3 (model variant XT1929-17, FCC ID IHDT56XJ1).  And the FCC OET authorization release likely is in advance of Mobile World Congress at the end of this month in Barcelona, when and where the 5G MOD may make its official debut before going on sale to the public.

While the retail price of the 5G MOD does not appear to have leaked yet, and maybe VZW will subsidize some of the cost, the device does not project to be inexpensive.  The parts list alone is significant, as the 5G MOD packs inside its own Snapdragon 855 chipset with X24 LTE modem, standalone X50 5G modem, multiple antenna arrays, and 2000 mAh battery.  Call the 5G MOD what it truly is -- a separate, cutting edge handset without a screen.

Of greater interest to this blog, however, is the potential effect on LTE RF performance that may come with the 5G MOD.  When the 5G MOD is attached, the Moto Z3 continues to rely upon its Snapdragon 835 with X16 LTE modem for any VoLTE or CDMA2000 voice duties.  But for cellular data, the X16 LTE modem goes idle, and LTE data handling gets passed over to the X24 LTE modem and RF signal path in the 5G MOD.  That means where 5G NR is not available, the Moto Z3 no longer dictates its own LTE RF performance.  Instead, the 5G MOD fallback LTE takes over.

Around Labor Day last year, I wrote a blog piece analyzing the Moto Z3 Play RF performance.  The focus was on the Moto Z3 Play, but the article also included the obvious comparison to the VZW exclusive Moto Z3.  In that spirit, let us extend another logical comparison -- Moto Z3 LTE both without and with the 5G MOD attached.

For level comparison purposes, I have reconfigured and reproduced first my last September graph of the Moto Z3 maximum uplink EIRP across its included LTE bands.  To this graph and others, standard boilerplate language applies.  All data has been gathered from publicly available authorization filings submitted to the FCC OET.  RF lab tests report maximum uplink transmission, not downlink reception.  Good baselines for maximum EIRP and antenna gain are 200 mW and 0 dBi, respectively.  And in the case of low band ERP figures, I have converted those manually to EIRP. 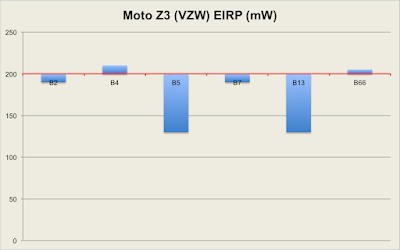 To add a few more facts and figures about Moto Z3 lab tested LTE performance, it hits conducted power targets of ~23.5 dBm and has antenna gain that ranges from 0 dBi for mid band to -1.8 dBi for low band.  That adds up to max uplink EIRP at ~200 mW for mid band, ~130 mW for low band.  On paper, that is average to good LTE RF performance. 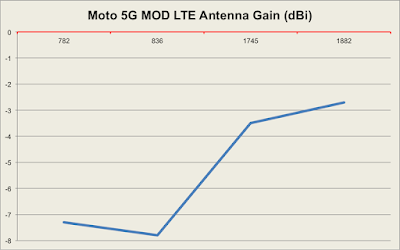 That roughly 3-6 dB reduction in antenna gain is responsible for a substantial decline in EIRP across the board, maxing out at ~120 mW for mid band and ~40 mW for low band.  Conducted power figures are ~24 dBm, so on par with those of the Moto Z3 alone.  What that means is the 5G MOD is not making up for diminished antenna gain with inflated conducted power.  And that shows in the somewhat poor EIRP. 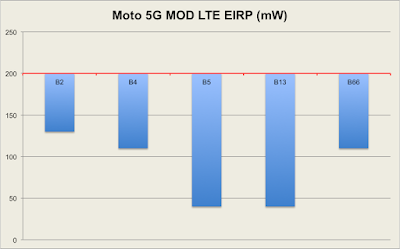 The takeaway is that the Moto Z3 with 5G MOD attached probably will experience some degradation in raw LTE performance and may struggle to maintain LTE connectivity in some challenging situations in which the Moto Z3 alone is fine.  Whether Motorola has engineered in a secondary fallback under those circumstances that idles the 5G MOD and shunts all LTE connectivity back to the Moto Z3 remains to be seen.

The Motorola Mobile 5G MOD has separate FCC OET authorization filings for its band 48 LTE and band n261 5G NR lab testing -- because those bands fall under different parts of the Title 47 CFR.  Maybe we will take a look at those high band and mmWave RF specs in a future article.