Antennagate 2018: "You're getting my findings wrong"

Two weeks ago, I dug into the FCC OET authorization filing documents for the iPhone XS and XS Max the afternoon that they were made public, and I started to review and extract data on the certified lab tested RF performance of both forthcoming handsets.  This is something that I have done for dozens of devices over the last decade.  Some of the 2018 iPhone RF measurements struck me as comparably and unexpectedly low, worthy of some graphical and contextual analysis that might be of interest to a few hundred readers.  I did not expect another so called antennagate to emerge, nor for tens of thousands of average viewers to take note of what is a fairly technical topic.  And because my work (1, 2) has drawn an audience well outside its intended scope, I feel a need to editorialize a bit.

Correlation does not equal causation.  My goal long has been to present findings, raise questions, and posit possible explanations/solutions.  My goal has not been to assert that iPhone XS and XS Max low gain antenna designs are the exclusive or even partial causes of all the wireless signal ills that some new users are experiencing.  The correlation exists, but the cause(s) remain(s) undetermined.

Unfortunately -- though I do not think nefariously -- some forum posters and media outlets have run with my findings, questions, and explanations/solutions to form distorted or at least simplified conclusions that say something to the effect of the new 4x4 MIMO antenna array is to blame, the Intel baseband modem is not to blame, the Intel baseband is indirectly responsible due to design compromises that would not have been made for a Qualcomm baseband, etc.

In the interest of clarity, let us find some solid bedrock on which to stand.

What can be said definitively is the iPhone XS and XS Max exhibit lab tested RF performance for antenna gain and radiated power output (EIRP) that almost invariably measures lower than the same metrics on 2017 iPhone variants and other recent, comparable handsets.  A visual recap...


...Apple's decision to forgo Qualcomm this year and source all cellular modems from Intel is not responsible for the RF power output limitations in the new iPhone models.  The cellular baseband modem is separate from and well upstream of the amplifiers that generate the conducted power and antennas that generate the radiated power being measured in lab testing.

Those two findings are demonstrable facts.

To follow up the latter of the two facts, I posted this on Twitter last night, though if you have been following just my blog pieces, you may have missed it.

The two 2017 iPhone X variants -- with Qualcomm baseband and with Intel baseband -- perform almost identically in RF testing submitted in their FCC authorization filings.  And I do mean almost identically, right down to the decimal place -- this speaks well to Apple's precision tolerances in design and manufacturing.  The lone deviations between the two variants are on bands 41 and 66, and only band 41 presents a difference worth discussing.  The maximum antenna gains across all bands are exactly the same for both Qualcomm and Intel variants, but for unknown reasons, the Qualcomm variant puts out 50 mW greater conducted power on band 41, hence also 50 mW greater EIRP on band 41.  That is absolutely it for the raw RF output differences.  Any other cellular performance differences likely can be attributed to the Qualcomm baseband versus the Intel baseband.  That controversy is well known. 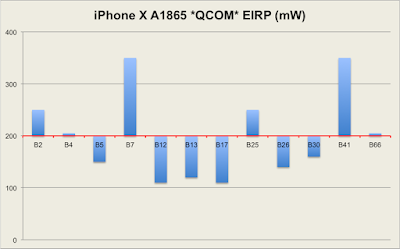 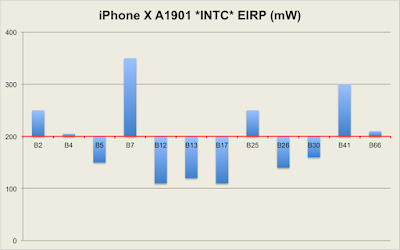 So, a takeaway here is that Apple designed and manufactured the two 2017 iPhone X variants effectively the same -- just plopped a Qualcomm modem in one, an Intel modem in the other.  Now, definitely not a fact but informed conjecture, Apple ostensibly would have done likewise this year if there had been a Qualcomm variant.  In other words, a hypothetical iPhone XS or XS Max with Qualcomm baseband probably would have followed precedent with the same antenna array, thus the same radiated power levels as that of the current Intel model.  Take that for what you will.

...signal bars are just a coarse approximation of signal availability/quality and can be calibrated to almost any arbitrary standard.

To expand on the above advisement, iPhone XS and XS Max possess capabilities -- aforementioned 4x4 MIMO reception, additional low band (bands 14 and 71), LAA (band 46), and downlink carrier aggregation combinations -- that are not available on previous iPhone models.  Some may argue that those are RF improvements, but again, they are capabilities or features that are not at parity with those of iPhone predecessors.

That said, I get it.  To those who want to try to assure themselves that their new iPhones can meet their everyday needs and do not care whether that is accomplished through raw RF strength or new network capabilities, fine, okay.  Check signal bars and run speed tests.  Just understand that signal bars and speed tests -- absent thorough additional documentation from Field Test -- are not replacements for objective measurements.